Tungabhadra floods in 2009 and its impact on my village

Tungabhadra floods in 2009 and
its impact on my village

River, when it flows beyond its limits: A story about the
Tungabhadra floods in 2009 and its impact on my village

River, when it flows beyond its limits: A story about the Tungabhadra floods in 2009 and its impact on my village

This story takes place during my Vijayadashami vacations in 2009. The river Tungabhadra, a tributary of the Krishna, flows next to Village Garlapadu in Telangana, about 5km from my own village, Dharamavaram. Most of the houses have mud roofs. The village has a few dug wells which people still use for drinking water and other purposes. There is a lake that is used for fishing and irrigation. A canal constructed across the village provides water to the other end of the village. This beautiful place is full of crops, vegetation and ancient temples. At the time that this event took place, everyone was happy, and the temples of my village were lit up for the puja of the goddess Durga.

But the very next day of the festival, a rainstorm appeared and became more severe during the week. The Tungabhadra flooded Garlapadu and came dangerously close to my village. Luckily, most of the residents had evacuated to the government school, carrying food and livestock with them. In the other side, the village lake began to overflow, and contaminated a big well used for drinking water with by flooding it with wastewater. We managed to clean it after the event.

During the storm, I observed that the water was flowing with such turbulence that a few big fish died due to it and were caught by the villagers. Aquaculture was destroyed due to mismanagement of the well and the lake. The roads were flooded and gradually eroded. A separate water channel formed carrying water to the Tungabhadra downstream of the village. The water reached the boundary of my village and the residents were forced to abandon our houses and take shelter in the school. Those 10 catastrophic days left us in a horrific state without clean water, electricity and barely any food. A few famous cities like Kurnool (the first capital of united Andhra Pradesh) was flooded completely and Mantralayam, a holy place in Kurnool district, and Alampur in Mahbubnagar district, were totally submerged. All amenities came to a halt. A bridge constructed on the Tungabhadra river at Beechupalli recorded water levels above 80 feet, almost touching the surface of the bridge. People were forced to use it to cross the channel even though it was shaking. We formed a group in our village to help people by providing food and clothes to the people who lost everything during the disaster. We learnt some important lessons about the following during the event:

1. Encroachments into the river flood plains caused damage to crop and houses.
2. Mismanagement and misuse of lake and wells
3. Lack of preparedness and awareness of natural calamities.
4. Not enough evacuation sites to accommodate the victims

Understanding river dynamics is a challenging task and it is inadvisable to alter river plains for any purpose because society will have to pay a cost later. This is one of the situations that made me opt for a career in the management of natural hazards such as floods. 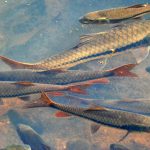 I have walked that river, I have seen the fishMemories of the river 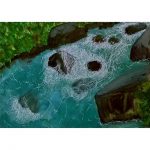 What happens when humans try to control natureMemories of the river