The theme of this year’s India Rivers Day is ‘Rivers in the Urban Context’.
Like the past three India Rivers events, the Bhagirath Prayas Sammaan will be awarded to individuals who have made outstanding contributions or attempts to save or revive rivers. So far there are eleven BPS awardees from different parts of the country who were recognised for their valiant efforts to save different rivers. BPS has become the medium to also showcase successful initiatives on river rejuvenation from across the country, thereby recognising local movements, initiatives which have made remarkable impact on ground.
This year, in the memory of Late Shri Anupam Mishraji, Gandhian, journalist and renowned advocate of traditional water management, the Anupam Mishra Memorial Medal will be granted to outstanding media professionals for their in depth, unconventional work on rivers. The purpose is to celebrate professionals who have established an exceptional body of credible work, and act as torch bearers for others.
This year’s event will also host a photo exhibition and a panel discussion on Urban Rivers. 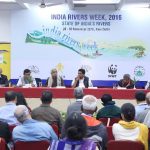